Originally published as part of the Campus Cravings bundle, Winning Bracket is now available on its own with a BRAND NEW bonus epilogue/short story!

A sexy bet on a basketball tournament challenges nerdalicious Edwin and party-boy Ollie to change their relationship status from frenemies to lovers.

Oliver Marshall has been a sexy pain in Edwin Schultz’s side since freshman year. Now seniors and competing dorm resident advisors, the two are in constant strife over noise levels and study hours. However, deep down, Edwin’s been nursing a painful crush on Ollie for years. When Ollie proposes a bet on a basketball tournament, Edwin seizes the chance to put his inconvenient feelings for Ollie behind him once and for all.

Edwin’s not the only one suffering a case of unwanted attraction—Ollie’s been running from his feelings for Edwin for a long time. He doesn’t understand how someone who drives Ollie so crazy with his adherence to rules can be the same guy who makes his pulse pound. In fact, Ollie’s never been so eager to lose a bet in his life.

As the challenge becomes a hot bedroom battle to avoid real emotions, the two “frenemies” must change their definitions of losing to win a shot at lasting love.

Ollie kept looking at him, dark eyes patient and kind, like he really did care about Edwin and Edwin’s GPA. The dark slashes of his eyebrows were a contrast to his creamy skin and heart-shaped mouth, offsetting his elfin features with a masculine edge that had always intrigued Edwin.

Edwin exhaled a long, you-win sigh. “Maybe I’ll try not to go all RA Buzzkill while the games are on.”

“Awesomesauce! You should come grab some pizza too.” Ollie grinned widely, showcasing a row of perfectly white, straight teeth. Having an orthodontist dad had its perks—high limit credit cards and a gorgeous smile. “And you should do the bracket challenge!”

“For what reason?” Edwin refused to be dazzled by Ollie’s smile. Or charmed by Ollie’s attempts to rearrange the English language. If he wasn’t adding “-ie” sounds to perfectly good nouns, he was coining his own adjectives. Like “awesomesauce.” Ridiculous word.

“For fun.” Ollie snorted like Edwin had asked an absurd question. Like randomly picking game-winners from an array of schools Edwin had never heard of was the best way to spend Sunday. “I’ve got some great prizes lined up.”

“Oh come on. We could bet.” Ollie’s eyes sparkled. “Like if my final-four bracket beats yours, you host the watch party.”

“Dream on.” Edwin tried to ignore the feeling of intrigue curling low in his gut.

“Oh come on, Eddie. Think about what would happen if you won! Isn’t there something you want from me?”

You have no idea. Really, none. Edwin had spent the last three years being very, very careful to hide even a hint of “something” from the too-perceptive Ollie. This year had been the worst. Ever since August…

And okay, he was not going to think about August right then. Not with Ollie sitting on the bed looking all eager. Like he’d enjoy nothing more than making Edwin’s dreams come true, though Edwin knew that was far from the case.

Edwin wasn’t a jock, he wasn’t a party guy, he wasn’t tall, he wasn’t cute—he was nothing like the guys Ollie crushed on. No, Ollie was a lit firecracker, and Edwin knew better than to grab on and hope the bang wouldn’t explode in his face.

“I don’t know anything about the teams—no point in doing random guesses.”

“No point? The whole point of the tournament is random guesses! Grady won our floor’s pool last year by picking all dog mascots to advance and all cat mascots to lose. I kept track of the teams the whole season, and I came in second. There’s no way to predict which big-time teams are going to choke.”

Ollie’s hands grabbed at his own throat, his fingers curving like claws, his eyes crossing, his mouth emitting horribly realistic gagging sounds. Right when Edwin started to get a bit worried, Ollie dropped his hands and grinned. “You know. Choke. Whiff on their chances. Lose even though everyone thought they’d win. But that’s the absolute best part of March Madness—the Cinderella stories. The tiny teams that no one sees coming, and they seize the moment!” Ollie’s hands grabbed at the air in front of him. Like the moment was a real thing to seize. Like randomness and chaos were things people should want.

“Because they finally get a chance to go to the big dance.” Ollie’s hands stopped moving. His face sagged. Like Edwin’s lack of basketball IQ was zapping his energy. “Come on. You make some guesses, and if you’re right, I’ll do whatever you want. And if you’re wrong—”

“Hold up. If I filled out a bracket and mine beat yours, you’d do whatever I wanted? Like anything?”

“Sure.” Ollie shrugged, an insolent lift of surprisingly wide shoulders inside a too-big shirt. “I mean not all day. But sure, you want me to be a slave for an hour or something, I can take it.”

Ka-pow. The firecracker exploded, hot want raining down on Edwin, sparking against his skin. Anything. Ollie-as-slave images began to run on repeat in his brain, Ollie getting considerably less clothing with each pass. Edwin could ask for anything, and it would just be a joke to Ollie—a lark to be laughed over later, no more of a big deal than opening up with a can of silly string or shorting his sheets every night for a week.

Oh my God. Would it work? Could he use something like this—a stupid bet on stupid basketball—to exorcise the Ollie demons that had plagued him for years, all without having to admit how he felt about Ollie?

Because while Ollie had been busy with the jock-crush-of-the-month plan, Edwin had been hung up on Ollie. For three and a half years. If a stupid bet could shake Edwin free, then it was worth having to learn something about basketball.

“Yay!” Ollie clambered off the bed, springs squeaking as he hit the floor. “You’ll see. This is going to be a great couple of weeks! So what are we going to play for this week? If my bracket does better by Sunday night, you send an email supporting the next watch party and you show up. And if you win…” 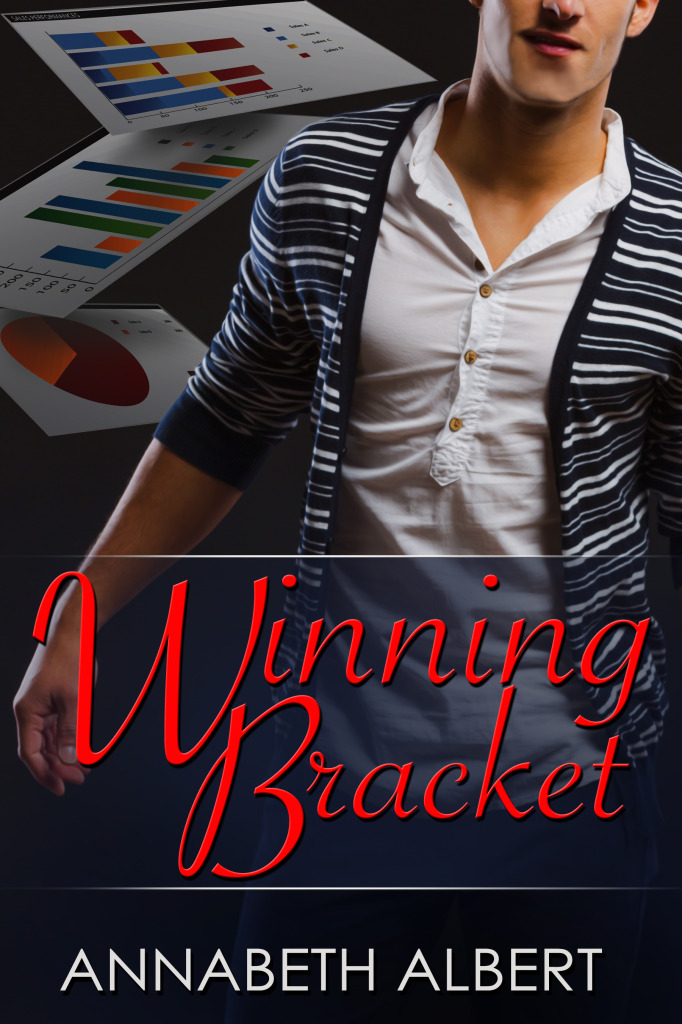