Wow! What a year! Everyone seems to be doing year-end posts, and I’ve been really enjoying reading them so I thought I’d do one too. On January 1, 2015 I had stories in three anthologies, two of which were about to be discontinued, and no single titles of my own. On January 1, 2016 I will have had eight single-title releases and one anthology, making for a total of nine stories released in 2015. WINNING BRACKET, RESILIENT HEART, SERVED HOT, BAKED FRESH, DELIVERED FAST, TREBLE MAKER, WAITING FOR CLARK, HOW WE BEGAN, and STATUS UPDATE all released in 2015, and man did I ever learn a lot about publishing in the process.

In addition to these lessons, 2015 was the first year that I kept careful track of my process. This is what my year overview looks like: 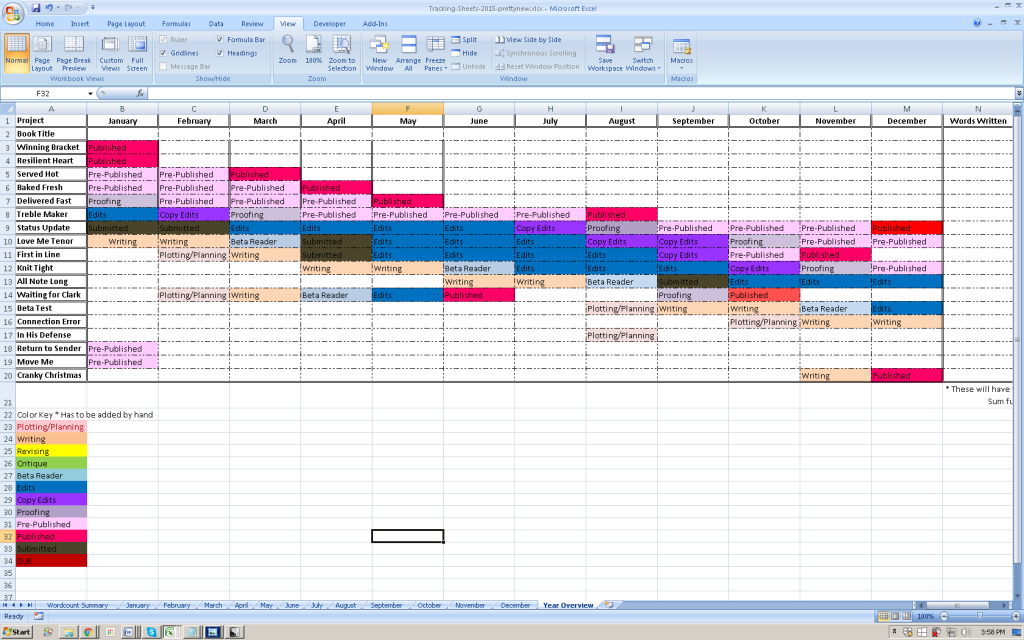 Holy cow! I touched 18 separate projects this year! That’s ridiculous! The number one this I learned from keeping track of my progress like this is that it takes me two months to draft a book. I simply can’t promise a book longer than 30k any sooner than that. If you look at the spreadsheet, there are very predictable stairsteps of writing months. Knowing this will be very helpful to me going forward. Also, months where a ton of edits arrived tend to be lower word count months, so I have to make sure to account for the time those parts of the process take.

You can see the edits/word count correlation more clearly here: 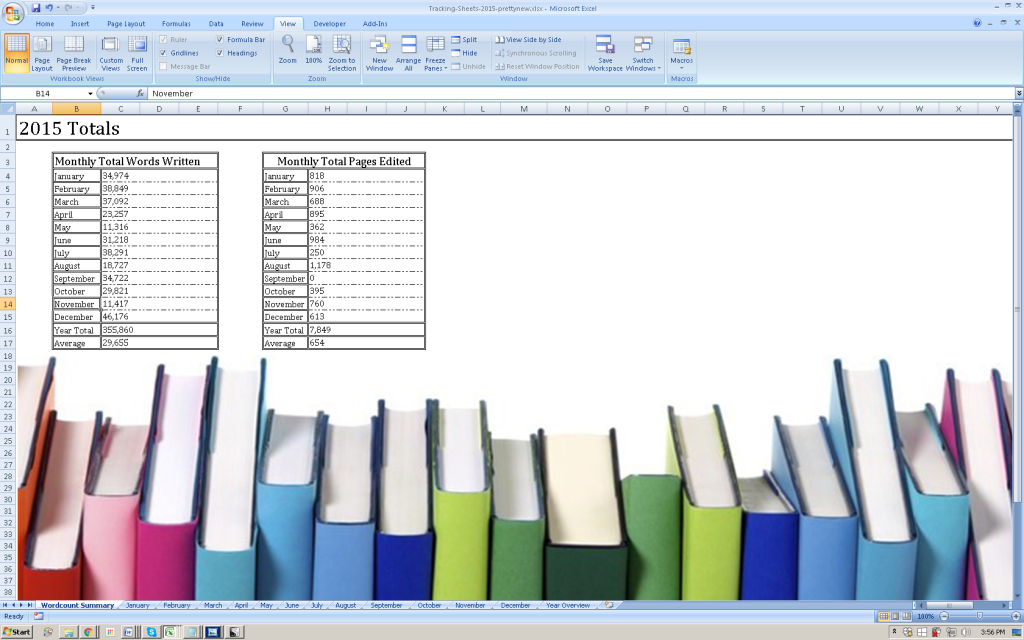 While I averaged almost 30,000 words a month this year, May, August, and November were far under that because of some tricky edits. Having enough time to deal with the edits is a key part of my planning going into 2016. My biggest word count month was December with 46,176. I don’t think that’s something I can count on each year though, as it was really challenging with family stuff and the holidays. Building in more time for breaks is key this coming year. I finished the year with 355,860 words and 7,849 pages edited (all those multiples passes per book add up fast!), and it feels like this is probably around my top speed. It would be kind of cool to hit 365,000 words next year, but the simple fact of the matter is that I’m not the fastest writer, not the fastest per hour writer for sure, and I need to just make my peace with that and celebrate what I did accomplish. Finishing six books and two short stories is a fabulous accomplishment that I feel super proud about.

Then in December comes Portland Heat #5, and I’ll start that book in January.  So far this year, I know that I’ll be drafting Portland Heat #5 and #6 and doing a freebie Reader’s Choice Novella with Wendy Qualls. (Reader’s choice = my facebook group will be voting on the characters, the setting, and other fun stuff! Join us at Annabeth’s Angels!)

I’ve got other goals for my reader group and my newsletter: 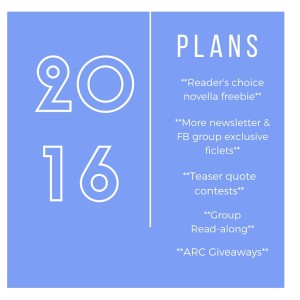 I can’t wait to see what else I get to write this year! Yay books! Yay words yet to be written and worlds I haven’t dreamed of yet! Remember too that I love hearing from my readers–if you want stories for secondary characters or ficlets for a favorite couple, feel free to let me know! No promises, but I love when you guys are as excited as me for more from a particular universe!

In addition to all those words, 2016 is going to be the year of balance for me. More family time. More long conversations with friends. More walks. Healthier eating. More yoga. I’m not making huge word count increasing goals because what I most want is to hold steady at this production level while also bringing more balance back to my life. And that is my wish for all of you for 2016–More books, more worlds to explore, and balance in your lives to enjoy it all.